The #1 Secret to Health, Longevity, and the Ideal Body

If you could change only one thing about your diet, what would make the biggest difference for your health and appearance? At PaleoFTMC, we believe the #1 secret to staying lean and living longer is eating a low glycemic diet.

In order to understand why eating a low glycemic diet is so powerful, we have understand the glycemic index.

What is the glycemic index?

Eating carbohydrates makes the glucose levels in our blood spike.  The glycemic index, which ranks foods from 0-100, indicates how much a specific type of food raises these levels in relation to a food that's used as a control- usually pure glucose.  The higher a food's number, the higher its glycemic index.

Why is the glycemic index important?

Eating a high glycemic diet has been linked to obesity, premature death, diabetes, cancer, heart disease, and several other diseases.

Why do high glycemic foods cause health problems and make us fat?

As a general rule, the human body likes equilibrium.  High glycemic foods upset this equilibrium by spiking the glucose levels in our blood, which causes our bodies to produce the hormone insulin. Excess sugar in our blood gets stored by our bodies as fat, which makes us put on extra pounds. This is one of the primary reasons why Western cultures, which favor high glycemic diets, are experiencing an obesity epidemic of massive proportions.

Eating a high glycemic diet won't only make you fat, though. Indulging too often in high glycemic foods also subjects our body to a hormonal and metabolic roller coaster that can  wreck our energy levels and make us susceptible to mood disorders, thus destroying our everyday quality of life and productiveness, while also causing our bodies to become insulin resistant; this subjects us to a host of diseases, including Type 2 Diabetes, and shortens our lifespans.

Why should I eat a low glycemic diet?

1. It will make you skinny and help you stay that way with less effort.

You'll be skinnier: As explained above, excess blood sugar gets stored as fat. Eating a low glycemic diet can prevent this, keeping you lean and toned, oftentimes without counting calories or macronutritients.

In addition to minimizing fat storage, you'll be less hungry and have significantly less cravings: The insulin and glucose roller coaster caused by eating high glycemic foods throws off our normal hunger mechanisms and makes us perpetually ravenous- especially for more high glycemic foods. Eating a low glycemic diet will make you feel satiated while you seamlessly consume less, without even realizing it.

You'll be less likely to overeat: Studies show that the consumption of high glycemic foods lead to overeating. High glycemic foods tend to be devoid of nutrients and fiber, while high in calories. This confuses our bodies, making it difficult for our bodies to know when we've consumed the right amount of calories and nutrients.

2. It will improve your health and make you live longer.

It will decrease your risk for diabetes: As we've already mentioned, our bodies produce insulin in response to high glycemic foods. Eating a high glycemic diet over a long period of time abuses the body's insulin system and leads to insulin insensitivity and diabetes.

3. It will improve your quality of life today.

You'll have more energy and improved moods: Ever feel like taking a nap at your desk after lunch? Most often, fluctuations in energy throughout the day are caused by our consumption of high glycemic foods. Controlling your blood sugar levels will stabilize your energy and prevent you from experiencing the moody side effects of carb crashes. This will make you more productive and effective and improve your experience of the present moment.

4. Our ancestors ate low glycemic, therefore you should too.

Our site gets it's name from the Paleo Diet. Although our nutrition philosophy is founded on a host of principles from several different dietary perspectives, one of the biggest foundations for our approach comes from the Paelo diet.  The Paleo diet posits that our nutrition should mirror that of our ancestors; this idea comes from zoological studies, anthropological research, and scientific investigation- all of which suggest that our digestive system is similar to the engine of a sports car: it's designed to run on a very specific fuel.

If you look at the glycemic index values of staples of our ancestors' diet, you'll find that most of them (excluding root vegetables and fruit, which our forebears would have only eaten in moderation) are very low glycemic. Therefore, if we base our food choices on evolutionary biology as research suggests we should, our diet should consist mainly of nutrient dense, low glycemic foods.

In comparison, there are only a few Paleo approved foods that have values over 50: including parsnips, honey, sweet potatoes/yams, beets and some fruits.

Further evidence to support the power of a low glycemic diet can be found from research investigating the health of modern day hunter-gatherer societies, whose diets are analogous to that of our ancestors. This research suggests that diseases such as cancer, diabetes, and heart disease are rare among populations that eat a diet comparable to our forebears'.

What foods are low glycemic?

According to the glycemic index table: 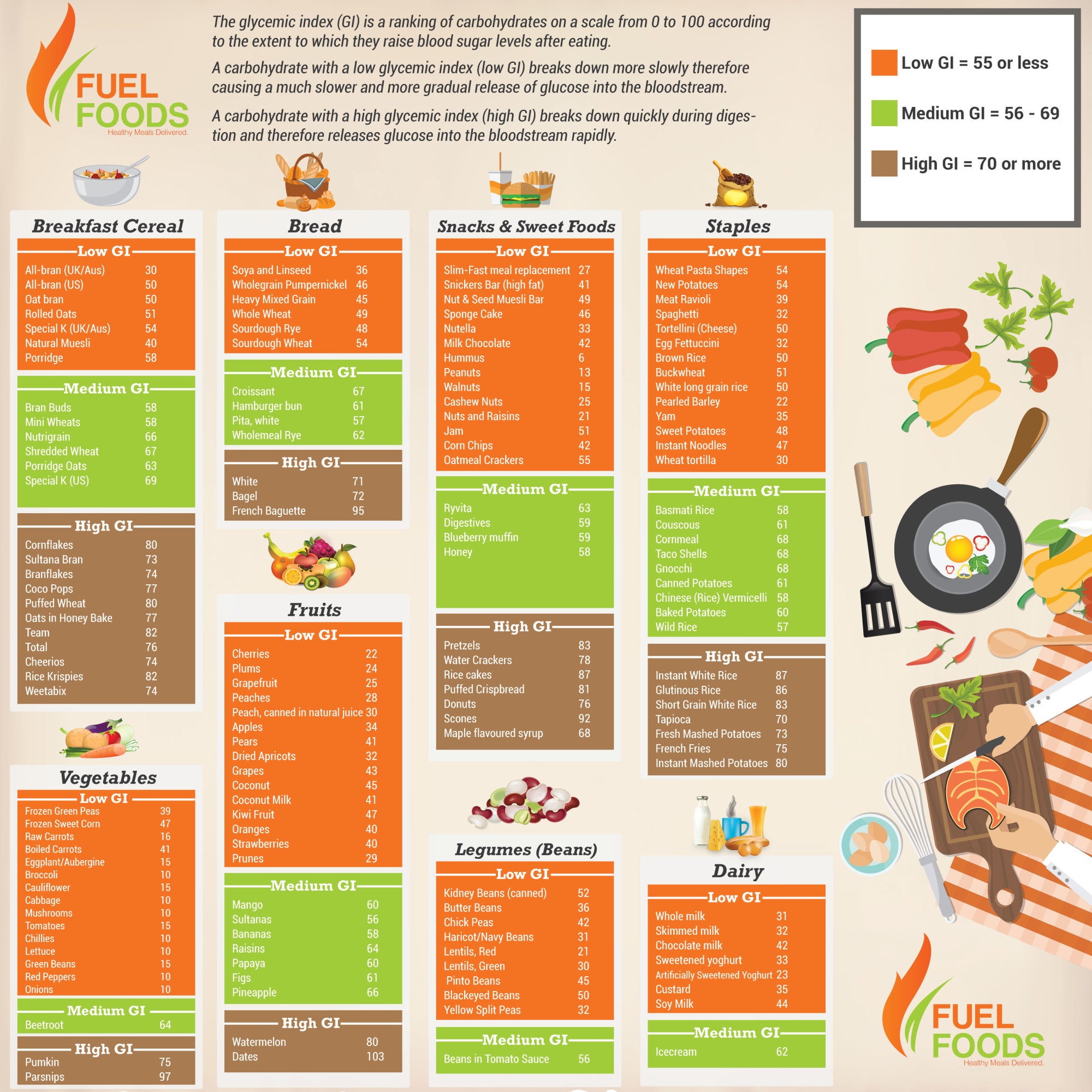 The image above contains some common foods and their glycemic index values.  As you can see from the table, most Paleo foods are low glycemic while most processed foods are higher glycemic.

Unfortunately eating low glycemic isn't as straightforward as merely checking a glycemic index for several reasons. First, not all foods are included in common glycemic index tables, so it isn't always a helpful reference. Additionally, the terms "low", "moderate", and "high", which are used as categories for foods listed in glycemic index tables, can be misleading. Most people associated the table's label "low glycemic" as synonymous with "good", "approved", or "healthy", but just because a food is labeled as "low glycemic" doesn't necessarily mean it's low enough for us to indulge in it regularly. This is because the terms "low", "moderate", and "high" are relative terms, not absolute categories, used to compare a chosen food to pure glucose. If something is labeled as "low glycemic", what that really means is that it's low glycemic relative to glucose, which is one of the highest glycemic foods known. For example, pasta has a glycemic index of around 44, which is technically considered "low glycemic"- when compared to pure glucose. This doesn't translate into a healthy food choice though.

If the glycemic index table isn't a reliable representation of what we should be eating, how do we determine what foods have low enough glycemic indexes to keep us leaner and living longer?

The solution lies in considering the glcyemic index of foods not merely in relation to glucose, which is how glycemic index tables are formatted, but instead in relation to the foods most commonly eaten by our ancestors and modern day hunter-gatherers. It's also important that we consider how nutrient dense our food options are.

Although the diets of our ancestors probably varied somewhat depending on location (for example, societies near the ocean probably ate more fish), most of our forebears subsisted on animal protein and high fibrous and high fat, plant-based foods. Examples of these staples include animal meat and organs, seeds, fibrous vegetables, fish etc. This type of diet consists almost entirely of foods with glycemic indexes less than 20, while occasionally including foods- like slightly starchier carbs or fruit- that have moderately higher values, often in the range of 20-50. As you can see, these values are lower than what's considered "low" glycemic in glycemic index tables; most glycemic index tables consider any food with an value less than 55 as low glycemic. Foods at the top of this range would have been significantly higher than the mainstays in our ancestors' daily diet. Therefore, if you base your diet around glycemic index tables alone, not taking into consideration our evolution, you could still be eating a much higher glycemic diet than is common to hunter-gatherers.

In addition to considering how our nutritional choices compare to our ancestors, it's also important to evaluate food options based on their nutrient density. Not all foods- including low glycemic ones- are created equal when it comes to nutrient density. Most of the foods our ancestors ate were packed with nutrients, while a lot of our Western staples are shockingly devoid. For example, apples and corn chips have relatively similar glycemic index values (about 40) according to glycemic index tables, yet corn chips are empty calories when compared to fruit. If you are indulging in a slightly higher glycemic snack, it's worth considering the nutrient content of your options. This help maximize the power or the calories we ingest.

Low glycemic diets lower our risk for diseases and are linked to leaner figures and greater longevity. Unfortunately glycemic tables are notoriously difficult and deceptive references to navigate. Therefore, it's important we understand how to read these tables through the lens of evolutionary biology. To maximize our health and wellness, the mainstays of our diet should reflect glycemic index values similar to those of the staples found in our ancestors' diet, and they should be packed with as much nutrients as possible.

What's the difference between the glycemic index and glycemic load?

Unlike the glycemic index, the glycemic load takes into account the serving size of a food.  Glycemic load tables, like glycemic index tables, can be difficult to reference and can often be deceptive. Because they scale foods based on serving size (which is arbitrary and not reflective of how much we may actually be eating in a sitting), it can make us falsely believe that destructive foods that are empty of nutrition- like breads and pasta- are ok to eat on a low glycemic diet.